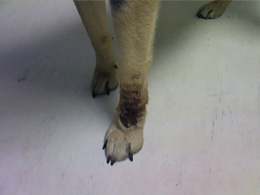 We believe instead that this is connected to metabolites/residues in the food which cause the content of the glands to become dense and therefore capable of blocking the small duct through which the glands are normally expressed when stools are passed. In extreme cases we see abscesses and ulceration of the area which mean that the duct has been completely blocked.

Do dogs eat grass? Yes sometimes they do but what about an excessive grass eating behavior? Dogs do eat grass and then they do vomit but they are otherwise well, grass can also be found in stools. Sometimes the excessive desire to eat grass is associated to another common behavioral problem namely constant paw licking. This is a very frustrating problem for the dog and for the dog owner. The licking could be so severe that it causes a chronic skin lesion (called lacral lick dermatitis/granuloma) sometime connected to deep skin infection. Nothing seems to cure it and the final diagnosis may be a sort of obsessive compulsive-like disorders (as seen in humans) which has to be treated with “brain medications”. Some cases presented were “treated” with the Maxhealth diet only and the results were significant. We have no doubt that some of these cases (constant paw licking) are connected to food.

Sasha, 7 years old suffering from chronic acral lick dermatitis/granuloma for more than a year. The condition was complicated by deep Pyoderma.  Sasha also had a high fever, treated with antibiotics for one week, buster collar and diet changed to Maxhealth. Our experience in this type of problem has shown that about 50% of the dogs do very well on the diet, therefore a simple dietary modification may be a reasonable first line of intervention