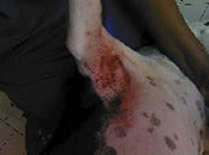 After this initial treatment I did not see Jozy until one year later when she was presented with an upset tummy. Honestly I did not recognize her immediately, only near the end of the consultation I did ask the owner if she was the same Jozy that had been treated for a skin condition a year before and the diet then changed to Maxhealth. Well the owner confirmed that she was still eating Maxhealth and doing so well with it. I took few more pictures to confirm that we were dealing with the same dog as I could not believe the great condition she was showing.