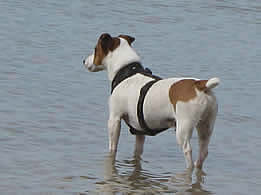 We thought it was an allergy to the grass as it seemed to be worse before the winter came in for his 1st birthday. He still itched through winter but not as much and then spring time and into summer he started scratching really bad again.

We tried ointments but he would just lick those off and then put him on anti-histamines which would help him but did not take the problem away. I then took him to a homeopath vet and we got a load of goodies for grass allergy, stress etc and that didn’t really help.

This continued for almost another year and then I changed him to …………sensitive skin which also did not help. We also started feeding him a lot of frozen chicken portions – this made things REALLY bad (makes you wonder doesn’t it??) .I was exasperated !! I felt so bad I could not help him. He was completely miserable, I thought about changing the grass in my garden. Anything that might help.

I then wondered !! Maybe it’s the chicken ? As aren’t they packed full of antibiotics and steroids and homones etc? So I stopped giving him chicken. We saw an improvement straight away but it still did not stop him itching. By now he was red raw under his arms, his eyes were puffy and I resorted to putting Billabong kiddies surfing rash vests on him and campher cream so he couldn’t scratch but it still obviously did not fix the problem.

I then decided that I cannot be the ONLY one with this problem so I googled a question on the internet and the first hit I had was your website. Upon opening the pages I saw the pictures of I think the boerboel puppy – all pink underneath and I thought to myself “that could be Elvis in that picture’. So I read the whole site and then and there I decided I had nothing to lose so I went to my nearest shop bought a bag of Max Health and within I would say not even a week – he was like a different dog !! I was so happy. He was so happy! His eyes are full of life again and not puffy and tired and he is so playful and most importantly not scratching! I couldn’t believe it.

Also with Jack Russels they tend to get a bit chubby – Elvis is as lean as anything he looks fantastic and he is smiling again as only he can !!

Everything you say on your website makes perfect sense and as I said it makes you wonder what we expose ourselves to when we eat meat.

Thank you Max Health. I have recommended your food to all my friends who have dogs and will continue to do so. I have now even got my rescue husky on it as she loves food and I know how huskies can store fat if you are not careful.