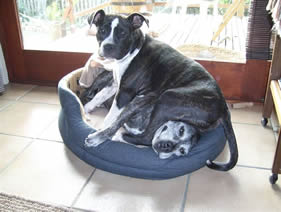 I started Roxy on Maxhealth after a 7 month battle to cure her skin allergy. She continuously scratched, licked and bit her skin to relieve the itch.  After spending hours on the internet, I found the Maxhealth website. Dr DM recommended that I change her, as well as my very senior staffie’s diet to Maxhealth. Roxy’s skin condition cleared up totally. Previously she was on cortisone tablets, daily applications of cortisone cream and daily antihistamines. The condition is now controlled by keeping her on the Maxhealth diet, with just an occasional antihistamine or cortisone injection when there is a flare-up during the high pollen periods.

The senior staffie has shedded much needed extra kilo’s whilst on Maxhealth. This has been an added advantage in our efforts to control her arthritis.  When I first noticed our 8-week old puppy stealing the older dogs’ Maxhealth pellets, I decided to change him to the diet as well.  He loves the puppy pellets, which proves that he has good taste even at such a young age!

p.s  It seems to run in the family as our parrot, Oros, also enjoy the occasional nibble on a pellet while we are busy preparing the dog’s food.