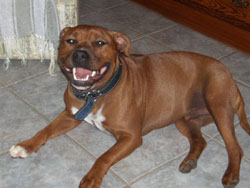 The next nine months were an absolute joy as he grew beautifully and very healthy until he was 10 to 11 months, when this horrible rash appeared on his stomach, groin and armpits. The Vet kept on giving us creams and tablets for this “eczema” and “allergies”, which didn’t help at all. I was heartbroken, as I saw Olive suffer so much during the last year of her life, and now my beautiful Zeus, still very much a puppy, had to go through his life plagued with these rashes that he used to lick raw, and without much medical relief! That was until I met Dr DM and he explained that Zeus was not suffering from allergies, but food intolerances and introduced Maxhealth to me and my dogs. Within two weeks the rash was totall,y gone, his fur colouring was enhanced and shiny, and he is now nearly two years old (b/day 31 October), and is one of the healthiest looking Staffies I have ever seen or owned. Thank you Dr DM for loving the South African canines enough and for bringing the European expertise in food intolerances to our country. Here are photos of my Maxhealth fed Staffordshire Bull Terrier ,,,,, he looks so good, ’cause he eats so good and makes much smaller poo’s!!!’ Maxhealth makes owning dogs such a pleasure, as instead of these huge mountains of poo on the lawn, we have these very discreet droppings, as 90% of Maxhealth food is absorbed by the dog.